Family owned & run since being established in 1957, Islawrffordd Caravan Park offers the very best in quality which you are immediately aware of when entering the award winning reception building, dining onsite or pampering yourself in one of our luxury Cader Suite boutique bathrooms.

Nineteen.57 Restaurant and Bar has been named Best of North Wales in the Restaurant Awards 2019 – Welsh Edition.

Members of the team collected the award at a ceremony held at The Exchange Hotel, Cardiff. Chef Sion Wellings, who took over the lease of the restaurant with his mother, Iola, confessed to being surprised when he was told the restaurant was one of 10 in North Wales shortlisted for the award.

“Someone had nominated us for the award which came as a big shock to be honest,” he said. “We haven’t tended to enter awards or to seek recognition with stars. We have just focused on serving good quality food. It’s the first award we have won and we were not expecting it. I am due to leave in January to concentrate on working on my house, so it’s nice to finish on a high.”

Sion and Iola have run the restaurant for five years and he was previously sous chef at Portmeirion for eight years. The restaurant has held successful themed evenings, charity events, parties, weddings, afternoon teas for baby showers and numerous black-tie dinners over the past five years.

In a joint statement, the directors of Islawrffordd Caravan Park, Gwynfor, Dylan and Geraint Evans and John Billingham, congratulated Sion and Iola for their award success. “We would like to thank them for achieving everything we hoped our £750,000 investment in the restaurant and bar would bring,” they said.

Located on the Cambrian Coast, Islawrffordd Caravan Park has 201 holiday homes, 75 fully serviced, hardstanding touring caravan/motorhome plots and luxury facilities, including a heated indoor swimming pool, sauna and Jacuzzi. The park was named Best Campsite in Wales by the AA in 2012 and was a finalist at the inaugural Mid Wales Tourism Awards in October. 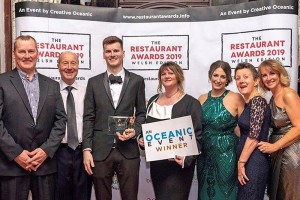 We use cookies on our website to give you the most relevant experience by remembering your preferences and repeat visits. By clicking “Accept All”, you consent to the use of ALL the cookies. However, you may visit "Cookie Settings" to provide a controlled consent.
Cookie SettingsAccept All
Manage consent

The Islawrffordd website uses cookies to improve your experience while you navigate through the website. Out of these, the cookies that are categorised as necessary are stored on your browser as they are essential for the working of basic functionalities of the website. We also use third-party cookies that help us analyze and understand how you use this website. These cookies will be stored in your browser only with your consent. You also have the option to opt-out of these cookies. But opting out of some of these cookies may affect your browsing experience. See our cookie policy HERE.
Necessary Always Enabled
Necessary cookies are absolutely essential for the website to function properly. These cookies ensure basic functionalities and security features of the website, anonymously.
Functional
Functional cookies help to perform certain functionalities like sharing the content of the website on social media platforms, collect feedbacks, and other third-party features.
Performance
Performance cookies are used to understand and analyze the key performance indexes of the website which helps in delivering a better user experience for the visitors.
Analytics
Analytical cookies are used to understand how visitors interact with the website. These cookies help provide information on metrics the number of visitors, bounce rate, traffic source, etc.
Advertisement
Advertisement cookies are used to provide visitors with relevant ads and marketing campaigns. These cookies track visitors across websites and collect information to provide customized ads.
Others
Other uncategorized cookies are those that are being analyzed and have not been classified into a category as yet.
SAVE & ACCEPT